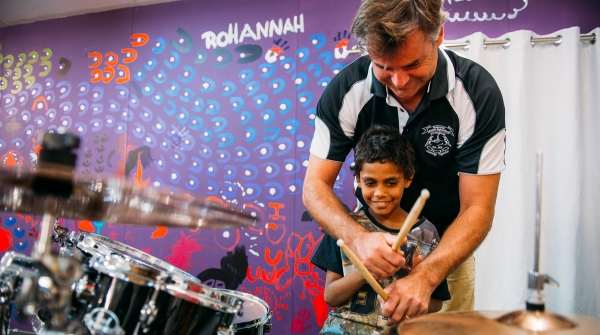 Best advice/motto: Never let fear of failure stand in the way of a good idea, then act on that notion and give 100 percent.

Up in Western Australia’s remote Pilbara region, in the tiny town of Roebourne, sits a transportable classroom – known as a ‘donga’ in the mining vernacular that dominates this dusty corner of the country. Inside are a handful of kids bashing out beats on the drums. Great smiles flash across their faces, their eyes are alight with excitement. These kids are here because they turned up at school. No school, no music. And that’s incentive enough for a great horde of Roebourne kids to give up the truancy that plagues many childhoods here.

Boonderu Music Academy is helping to transform the lives of Roebourne’s kids by luring them with music on the condition they attend school. For some of the 60 kids who attend the academy regularly, their school attendance rate has shot from around 20 percent school attendance to more than 80 percent. It’s an outstanding success in the town more often bemoaned as a hopeless case, a town more often associated with unemployment, family breakdown and alcohol abuse. For these are more than music lessons – they offer learning, somewhere to talk, somewhere people care.

It’s an outstanding success in the town more often bemoaned as a hopeless case.

The Aboriginal elders of Roebourne had long asked for help in improving life’s lot for their kids. And they’d said education was part of the answer. But education had to be a song, they said. And, like the stories from Dreamtime legend, the songs had to be sung over and over and over again until they became part of the children’s very psyche. It so happened that a musician from the leafy green suburbs of Margaret River in Western Australia’s south, Qynn Beardman, was in Roebourne, playing a private gig when he started chatting to one of the elders. He learned about Aboriginal people’s rich connection to music: how they sung stories to record historical events, how songs delineated tribal boundaries, how generation upon generation of people had sung songs to pass on stories down through time.

He also learned how the strong family ties that once bound the Aboriginal people so strongly had started to unravel along with the traditional culture. Some young people were no longer connecting with their elders. They no longer came together as one for the song and dance meetings so integral to their ancient culture. It was after such a discussion that Qynn began to wonder. Education, connection and music, he thought. Surely the three could be linked? And so began the vision for Boonderu Music Academy.

“I just saw these kids, they’ve got these little smiles, and they are sharp, they can dunk a basketball quicker than you can blink, and they just want to learn,” Qynn says. “It just struck a chord with me. I thought to myself, I can go back to Margaret River and say ‘isn’t it terrible’ or we could try to do something about it.”

“I thought to myself, I can go back to Margaret River and say ‘isn’t it terrible’ or we could try to do something about it.”

Qynn elected to take action. He approached big business CEOs and Aboriginal corporations and within three months he’d gathered $200,000 to launch the academy. He had been advised that he’d be doing well if five to 10 kids turned up for music lessons.

Qynn arrived amid roasting January heat, visited the school, obtained the donga-cum-classroom on the school grounds and set up a recording studio inside, complete with guitars, bass, drums, and digital recording equipment. Expecting a handful of kids to show, Qynn was swamped with 80 kids – nearly half the number enrolled at the local school. About 60 of these kids continue to visit Boonderu, and therefore school. Some of these kids had never before enrolled at school, let alone attended.

Expecting a handful of kids to show, Qynn was swamped with 80 kids.

From forest to desert

The unexpected popularity of the academy forced Qynn to rethink his plans. His wife Susie came to visit Roebourne and found herself similarly enamoured with the town’s youth. The locals they met were full of smiles and welcome, not the forlorn people they’d envisaged from media reports filled with sad stories of alcohol and drug abuse.

They fell in love with the rich history – in awe of the ancient Aboriginal art that decorates the rocks here in what is probably the world’s biggest collection of outdoor art. They loved the sense of freedom the kids here could experience – to be able to swim in the creek, ride motorbikes, play basketball, fish.

Impressed with what they saw, Qynn, Susie and their family decided to uproot and make the long move north. They bid goodbyes to their friends, to the trees, to the wineries, and trendy shops of their Margaret River home. They prepared to embark on a new life in the desert north – a place where multi-billion dollar mining enterprises operate alongside one of the world’s oldest living cultures.

The locals they met were full of smiles and welcome, not the forlorn people they’d envisaged from media reports filled with sad stories of alcohol and drug abuse.

And all the while Boonderu continued to lure the kids out of truancy and into education. So what’s the secret? “Music transcends everything, it just connects,” Qynn says. “Music is a wonderful carrot, it’s universal. The girls do Beyoncé songs and the boys want to be hip hop stars. And while they are side-tracked with music they are actually going to school.”

While going to school may be no big deal for some, for many Roebourne kids it’s a feat. In families battling a whole raft of problems, there are often no clocks showing when school starts, no adult telling the kids to get ready. So some kids just rock up at school around the right time if they happen to feel like it.

And these kids are now voting with their feet. They are coming to school. And they are staying there. “You give them music, you give them food and, more importantly, you’re just there for them,” Qynn says. “We’re building these relationships with these wonderful little people.”

“Music transcends everything, it just connects.”

While the academy is impacting the lives of many of its students, there are some who’ve really transformed. There was one youngster who’d lived a difficult life. “He was playing drums the other day and put his arm around me and put his chin on my shoulder and I just thought, good on you mate,” Qynn recalls. “That was a special moment.”

Qynn hopes to expand the academy to a multiplatform performing arts centre at the Roebourne school. He dreams of also luring kids from nearby towns such as Karratha and Wickham to learn music, dance and acting. He’d love to offer scholarships for kids otherwise disadvantaged by their remote location. He’s also working on recording an album with big-name Aussie musos working alongside Boonderu students. Documentary film makers are keen on recording the project.

“Deep in my heart I believe we’ve found an answer. Not the answer, there’s no one answer, but an answer for a fair portion of disconnected kids,” Qynn says. “Because ultimately, if kids have got a good education, they get a better view of the world and an opportunity to broaden their horizons. With education who knows where they could end up.”

“Ultimately, if kids have got a good education … who knows where they could end up.”