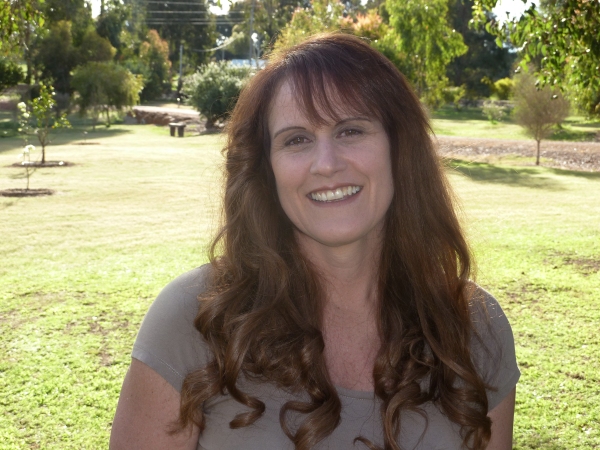 Who/what inspires me? ME – I am a very independent self-motivated person! But I am also inspired by the His Holiness the Dalai Lama.

Motto: Life seems to drop many bags of gold in our path, and rarely do they look like what they are. Indeed, my cancer diagnosis was a gift, a wake-up call to make the most of the here and now, that’s why it is called the ‘present’. The only way through life is to stay positive and maintain one’s sense of humour. Life dropped me a bag of gold that I have recognized and will use to enrich my life, my loved one’s lives and the lives of others.

Advice: All that we are is the result of what we have thought. The mind is everything. What we think we become. So make sure your thoughts are positive and healthy!

Karen Civello was six years old, sitting at the kitchen table, when her 18-month-old brother choked on a T-bone steak he’d grabbed from his big sister’s plate. She watched in horror as her baby brother gasped for breath. Tears streaked down her cheeks as her parents scrambled to dislodge the bone in his tiny throat. Shock set in when she learned he’d died on the operating table.

From that day Karen’s life changed. Her little brother had taken the bone from her plate. It was her fault he’d died, her young brain reasoned. She was bad, her unconscious mind thought. From that moment Karen unconsciously made a promise to herself – she’d work hard, as hard as she could, to make things right. “If everything was perfect, I thought nothing dreadful would happen again,” she says.

Chat to Karen at her leafy-green wellness retreat today and it’s hard to imagine how her lived has played out. For this now down-to-earth wellness advocate was once a high-class stripper, raking in thousands and living a frenzied existence of booze and drugs. It wasn’t until she found herself curled up in the foetal position on the lounge-room floor that she knew life had to change. Through sheer strength of will and some outside help Karen managed to claw her way back.

This now down-to-earth wellness advocate was once a high-class stripper, raking in thousands and living a frenzied existence of booze and drugs.

Leaving a troubled childhood behind her Karen qualified as a chef but eventually gave it away for the easy money of striptease dancing. She worked hard, damned hard, eventually forming a highly lucrative business of high-end strippers, with half a dozen to a dozen girls under her employ and the cash rolling in.

One day Karen found herself sitting on a 60-foot boat, drinking champagne, eating caviar, men fawning over her curves, a nice house and car at home, and thinking surely she had it made. Here she was – a financial success, gaining the attention she’d always sought from her parents. And yet, after years of such work, a feeling of emptiness began to gnaw deep inside. Depression and anxiety descended. While she’d always declined the hard drugs in which her employees had indulged, one day she took an ecstasy tablet and fell in love with the artificial high. It was the start of a drug-fuelled descent into misery. “We were really partying,” she recalls. “We were doing crazy things, waking up in strange places with strange people, driving cars intoxicated.”

Karen found herself sitting on a 60-foot boat, drinking champagne, eating caviar, men fawning over her curves, a nice house and car at home, and thinking surely she had it made.

At one stage Karen found herself in Kalgoorlie, her bag crammed with $25,000 in cash her stripping team had earned in four days’ work, and on an enormous bender. Drinks and cocaine flowed until Karen blacked out. She doesn’t remember the trip home to Perth. She arrived with no bag, no keys to her house, and minus $25,000. It was the start of the wake-up call she needed.

The final blow came six months later after a three-day bender. “I couldn’t even tell you how much alcohol and drugs we took,” Karen says. But she can tell you how she felt afterwards, when she spent two whole days curled up in the foetal position on the lounge room floor unable to move. She’d hit bottom.

Drinks and cocaine flowed until Karen blacked out.

Things had to change. Karen went cold turkey. She not only gave up drugs and alcohol but caffeine and nicotine. She sold her house, paid off her debts, and went on the government’s New Start Benefit while looking for new work. She knew she’d struggle to work a normal job after having earned such good money so easily before. So she took up the New Enterprise Incentive Scheme to start her own business. She launched a personal training business Australian Body Fitness and Performance Training and threw herself into fitness figure competitions with ferocious intensity. But again she burnt out and the dark days of depression and anxiety clouded over her.

Deciding a change was in order, Karen embarked on a psychology degree, while continuing to run her personal training business and working another part-time job. Degree in hand, she took on a job as a drug and alcohol counsellor with Outcare, before moving to Corrective Services. During his time Karen met her future husband Vince. She moved house twice. She faced bullying at work. Despite having found love, depression and anxiety clawed at her very soul once more. “I was trying to be the best at everything,” she says. “I was working really, really hard. I think now I was just trying to get my parents’ approval and have them be proud of me. And I was so angry. I was angry at what I perceived was my parents’ lack of parenting skills.”

Depression and anxiety clawed at her very soul once more.

In the meantime, Karen and Vince had bought five acres in leafy green Bridgetown. Karen dreamed of opening a wellness retreat, somewhere she could combine her skills as a chef, a personal trainer, massage therapist, wellness consultant and a counsellor. More and more Karen found herself drawn to this oasis away from the city. Eventually she quit her job and decided to dedicate herself to opening the wellness retreat she’d dreamed of. Again she threw herself into the project, working 110 percent to shape the property to her high standards. And, eight weeks after opening the business, she was diagnosed with cancer.

The ‘gift’ of cancer

“I’d met my husband, we started living together, we moved to Bridgetown, we bought a house and we started a business – I think of the top 10 most stressful things in life I’d done half of them at once,” Karen says. The cancer stopped her in her tracks. Crippling radiation therapy scalded her entire groin and sickening chemotherapy had her bedridden. And yet she marks the cancer as a gift.

“I went to this cancer retreat and I just saw all these people with such anger,” Karen says. “I realised I’d been like that too. I was very angry at my parents. But I came to realise they did the best they could – my father was a child migrant at Bindoon so he’d never learnt how to parent. And I was reminded of something I’d always believed – that everything is connected, the mind, the body and the spirit. If you’ve got faulty thinking, ultimately that’s going to manifest somewhere in your body – either mentally, such as depression, or physically. I’d had years of drugs and alcohol abuse and that didn’t wake me up, I’d had depression and anxiety and that didn’t wake me up. But cancer was the universe slapping me in the face and saying are you awake now? It was my wake up call to say hey you are enough. You don’t need your parents’ approval to be an amazing, warm, generous human being.”

“Cancer was the universe slapping me in the face and saying are you awake now? It was my wake up call to say hey you are enough.”

The wake-up call made Karen even more determined to offer a wellness retreat to the world. But this time she’d go about things differently. She came to value her own self-worth. She took her time. “Society is all about driving us to achieve – to have the nicest car, the biggest house, awards on the wall, and we’re losing sight of what’s important, the simple things. And to be able to enjoy the simple things it’s important to have health and wellness.”

Karen customises retreats to guests’ needs, yet most focus on developing self-awareness, guiding guests to arrive at their own answers, trusting that they are enough, and that they know what’s best for themselves. “Through the cultivation of rest, relaxation, mind-body purification and a completely personal and thorough inquiry we may come to experience in a small but profound way an awakening of the self,” Karen says. “We are all amazing, worthy human beings,” she says. “It doesn’t matter if you’re the prime minister or a homeless person.”

“We are all amazing, worthy human beings. It doesn’t matter if you’re the prime minister or a homeless person.”

While guests rave about their experiences at KalyaaNa Spa and Wellness Retreat Karen says she continues to learn just as much from her clients. But it wasn’t until she visited her little brother’s grave earlier this year that she realised how far she’d come.

For the first time in all the years she’d visited, she noticed the etchings of tall trees with gumnuts and leaves that decorated the plaque. Gasping she realised that similar images and symbols marked her entire property at KalyaaNa. She suddenly remembered walking past the property years before noticing the etchings of gum leaves on the entrance gate door, and telling her mother how much she loved the place. It felt like everything had fallen into place. She’d found her niche in the world. She was doing what she was put on the earth to do. And, after sighting the trees and leaves etched onto her little brother’s grave, she felt he was with her. Her little brother was part of her life journey.

She was doing what she was put on the earth to do.