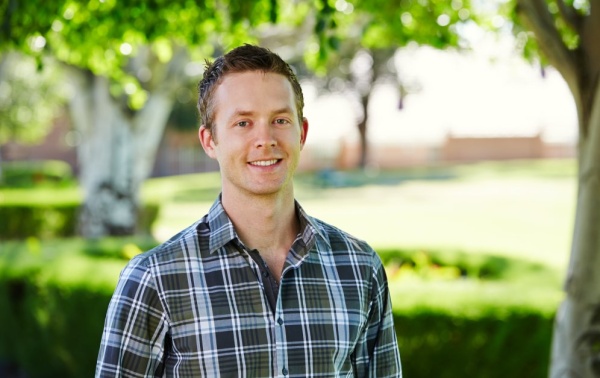 What inspires me: My fellow young Australian creative thinkers.

My motto: It is attitude not aptitude that determines altitude.

Best advice: Throw your heart off the blocks and the rest will follow.

Young doctor John van Bockxmeer was in a South Hedland hospital room caring for a morbidly obese 18-year-old patient when the idea struck. This patient was so overweight he could barely move, his body so strained by the condition that he struggled to stay awake. Sighing, John glanced out the window. He spotted a rag-tag group of kids kicking a tin can and a deflated football in the red dirt. The image of these kids, flashing white smiles and boundless energy, was a stark difference to the near life-less patient by John’s side. If only he could do something to keep these kids active, to prevent the illness that plagued the young man beside him.

Years before that day in the hospital John had already formed the idea of recycling unwanted sports equipment that lay abandoned, gathering dust and spider webs in garages and sheds. And here before him were the ideal recipients. Imagine if the kids kicking a tin can around had access to real footballs, basketballs, footy boots. Surely that would help stem the tide of preventable illnesses striking remote communities.

And so John set about realising his vision. Fast forward five years and the charity he started, Fair Game, has this year alone distributed 20,000 items of sports equipment, made 25 road trips to remote communities and reached 5000 participants. Fair Game not only distributes the equipment but also provides health education and encourages participation in sports thanks to its team of volunteer ‘Fair Gamers’. Such is the model’s success that Fair Game is now looking to expand into other Australian states. But what drives a young, overworked doctor to start a charity in his spare time? And how did he go about turning his dreams into reality?

As a student doctor keen on experiencing all facets of medicine, John applied to volunteer internationally. His first experience was working with Save the Children in Honduras. Hooked on the high he got from helping out, he soon volunteered with a government-hospital surgical team in Tajikistan, in a university teaching hospital in Zambia and in government hospitals in East Timor and Washington DC.

In the process, he discovered this feeling of doing good was what stoked the fire of passion in his belly, it was what he really lived for. “I get this real feeling of reward,” he says. “I love enabling communities to change – it provides a real sense of giving back and, ultimately, that’s my motivation.”

This feeling was cemented when John helped a friend start The Red Party campaign in 2007 to raise awareness about HIV/AIDS. The Red Party also conducts fundraising events for Oxfam Australia’s Integrated HIV and AIDS Program in South Africa. It has so far raised $200,000 for the cause.

Buoyed by The Red Party’s success, John and some mates started Future Perth in response to the negativity surrounding development at Elizabeth Quay in Perth. “We were young, brash and naïve so we just thought, why not?” John says. “We wrote a book called ‘33 Ideas to Change Perth’ and launched it, we also started Perth Hour, hosting monthly discussion forums on urban issues for young people. And we’re now seeing some of the ideas that stemmed from this coming to fruition – ideas like small bar licences, local governments amalgamating, and public art.” Future Perth continues to act as a voice of progress for Perth development, with John as vice chair.

Such experiences had equipped John with the confidence he could make a difference, with the skills to inspire others to join a cause. And so, after the epiphany in the South Hedland hospital room, he launched Fair Game in 2010.

“I love enabling communities to change – it provides a real sense of giving back and, ultimately, that’s my reward.”

John is the first to admit he started Fair Game with little strategy. He simply gathered a group of friends who shared his vision, hit up the community to donate equipment, raised some cash and packed up his friends’ boyfriends’ new Mazda 3 to the hilt.

The group of four then hit the road, en-route to Western Australia’s desert heart – the Murchison. Fired up about their adventure, chatting, laughing and listening to music, they soon got a reality check when they hit a kangaroo on a remote stretch of the Brand Highway. No matter, they did the rest of the trip in a car sporting an almighty dent.

“We were really excited and really looking forward to meeting the kids in Mount Magnet,” John says. “We had a boot-full of equipment and went to a kids’ training session and they were quite delighted when we handed out the stuff – squabbling over what colour shoes they wanted and that kind of thing. We finished that trip with this real filling of fulfilment and reward from the reaction of the community but we also realised a lot of stuff needed to happen to really make this work.”

So make it happen they did, recruiting new Fair Gamer volunteers (Fair Gamers), creating computing systems to monitor donated stock, applying for grants and piloting fitness and sports programs in the communities they visited.

Gen Y – in a positive light

Such is Fair Game’s success that John has taken out an obscenely impressive list of awards – including Young Australian of the Year (WA) 2014, WA’s 100 Best and Brightest (2014), Junior Doctor of the Year (2014), Youth Volunteer of the Year 2013, Australian Primary Health Care Young Leader of the Year (2013), and more. John also sits on various boards, including Volunteering WA, Future Perth, the World Economic Forum Global Shaper Hub and Fair Game. His experiences have led him to view his generation in a positive light.

“You know, 30 percent of volunteers in WA are aged under 30,” John says. “Young people can be really engaged if they are passionate about something. Young people are really socially aware. I think young people just have to dare to dream. Young people have the energy and they are creative, they are not tainted by others’ ideas. The things they want to achieve might be possible and they’ll never know if they don’t try.”

Despite the successes John’s charities have experienced and the awards he has obtained, feelings of doubt sometimes strike. “I worry am I doing the right thing, does the community actually want this, are we experienced enough to be doing this?” he says. “But I just try to push through that. I’ve realised that I have these doubts after one of two things – setbacks or when I’m really tired. Most of the time it’s when I’m tired so I make sure I take a step back.”

So how does John regroup? “I reward myself with something I enjoy every day – it might be sport and fitness, watching some TV or eating something really good,” John says. “Last night I was in the emergency department until midnight so I just really enjoyed sitting down with a paper and having a coffee.”

John also recommends daily meditation and making an effort to be in the present. “My problem is that I’ve got this affliction where I love everything I do – so I try to do all of it,” he says. “So I’ve got to be really efficient with my time, and be totally present in the moment. That’s probably something young people are losing to this idea of instant gratification. Everyone is eternally ‘on’ but, for me, working on really being in the moment helps deal with that.”

“My problem is that I’ve got this affliction where I love everything I do – so I try to do all of it.”

Doubts and time-constraints aside, John says it’s often hindsight that reveals how much he’s achieved. He looks back on a recent Fair Game road trip to an Aboriginal community in the Pilbara as a highlight. The trip happened to coincide with his 29th birthday. He’d been visiting this community for five years and developed a great relationship with them – a notion that was cemented when the kids held an impromptu birthday party for John on the local basketball court.

“That was such a happy moment,” John says. “I felt a real sense of equilibrium – there was that feeling of mutual respect, and the realisation that they were teaching us just as much as we were teaching them – we were learning about culture and identity from the community whilst at the same time sharing knowledge about health and fitness. I think that’s what the Fair Gamers appreciate most – that this is a real two-way relationship that we are also getting so much out of. It’s pretty special to be part of that.”

“… there was that feeling of mutual respect, and the realisation that they were teaching us just as much as we were teaching them…”

Links to information about some of the charities John has helped launch.