What inspires me: I feel inspired by actions that reflect care for the connectedness of all life on this planet. We are all one – what I do to you, I do to myself and my loved ones.

Motto: I want to live simply so others may simply live – Mother Teresa (I think).

On December 31 2014 Jo Nemeth spent her last few dollars. A couple of dollars went on New Year’s Eve snacks and she tossed the rest into a donation tin. She knew the next day she’d wake up for the start of an experiment with cash-free living. Jo was sick of consumerism, guilty at the impact her western life had on the precious planet. If she didn’t spend, she figured, she’d drastically reduce her environmental footprint.

Since that day more than two years ago Jo hasn’t directly spent another cent. She has lived simply, dining from her garden or with friends and, in the process, not only slashed her environmental footprint but discovered the richness in slow living and the beauty that emerges in relationships based on both giving and receiving.

She discovered the richness in slow living.

Rewind a few months before the start of her experiment and Jo was laying sick in bed on her birthday flicking through the pages of a book her parents had gifted her – Changing Gears, which documented the journeys of those who’d opted to downsize. Taken by the idea of leading a simplified life, Jo pondered how she could do so. She had a good job as a community development officer but she was constantly stressed. She already regarded herself as a bit of a hippy, but even so, she felt stuck on the treadmill of busyness and consumerism.

“At the same time I’d been reading about the impact my consumerism was having on people around the world,” Jo says. “It all just came crashing down – reading all this stuff and feeling stressed and sick. I felt so sad and overwhelmed by the pain and suffering [our western lifestyles causes].”

What if, Jo pondered, she simply stopped buying stuff? By going without she’d reduce her impact to near nothing. 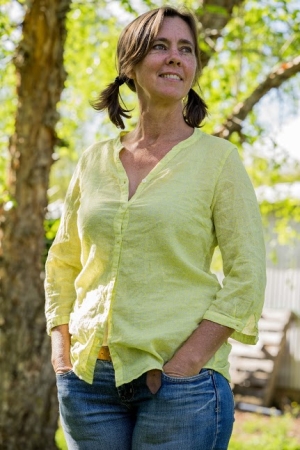 Back at work and well again, Jo couldn’t shake the idea. Could she really do it? What would people think? She didn’t want to be a bludger. But imagine showing people that it really could be done. Maybe it would encourage others to reduce the environmental impact of their consumerism.

Jo determined to conduct the experiment. First she ensured her then 17-year-old daughter was comfortably set up, as she had already planned to move out of home. Then she resigned from her job. Next she gave away her possessions. While she didn’t have much, she relished the freedom of getting rid of ‘stuff’.

Jo asked some friends if she could build a shack on their northern New South Wales property and reside there for a year in return for helping around the property and looking after their three boys as needed. They loved the idea of the experiment.

So, on January 1 2015, Jo moved into a tent on the 60-hectare property while she set to work building a shack. Perched on ridge overlooking rolling farmland, grazing sheep and cows, the site felt perfect. Finally ensconced in the cabin, Jo settled into her cashless lifestyle. She passed the days gardening, eating, reading and helping around the property. She grew her own food, ate fresh eggs, drank from the rainwater tank and used serviettes friends saved from restaurants as toilet paper.

Physically her body started to change as the exercise and fresh food made her leaner, fitter and stronger. But mentally she noticed she was replacing her past worries about work and bills with new ones. “I had been  living in that stressful making-a-living world and it was interesting to see how I tried to replicate that stress in other ways – feeling obligation towards the family [where I was staying], negative self-talk, and guilt,” Jo says. However, as Jo noticed her mind’s tendency towards negativity, she let it drop and soon eased her way into her new life. She also took to hitchhiking – hiking down the steep hill from her shack to the road for a lift into town. And she found the experience extraordinary. As strangers welcomed Jo into their cars, they’d share their stories with her in a way she’d never before encountered. And, because she had the time, she really listened. “I met the most amazing people,” Jo says. “Often when I got into a car people really needed to unload – it’s like a counselling session sometimes. I felt really humbled that people opened up to me like that.”

Because she had the time, she really listened.

But with the relaxed and open lifestyle came a sense of guilt. It wasn’t the going without money that Jo found hard, it was listening to her own inner critic. “I really questioned if I was doing the right thing, I asked am I just bludging off people as some people suggested on social media. I felt guilty that I was leading this great life while everyone else was struggling. But when I felt really bad about it I’d talk to the friends I was supposedly bludging from and they totally supported me.”

As the year at the farm drew to an end, Jo contemplated what she’d do next. She wanted to continue the lifestyle but the shack arrangement had been for a year and she didn’t want to overstay her welcome. She drifted between various housesitting jobs before moving to somewhere more permanent.

However, just as she was moving, one of Jo’s closest friends lost her husband in a sudden accident. Jo’s lifestyle meant she was able to move in with her friend to help her at the time of her greatest need. “I feel so lucky to be able to be there for her,” Jo says. “If I were living the life I had been before I wouldn’t be able to give to her in the way I have been able to.”

“I feel so lucky to be able to be there for her.”

Today, as Jo continued her cashless living lifestyle indefinitely, she plans to move from her bereaving friend’s house as soon as the friend is ready to live alone again. She’ll move into a wagon on another friend’s property, who is also interested in doing his part in the low-impact living experiment.

Jo is also giving talks at schools and wants to expand her speaking engagements to show people what is possible when it comes to reducing your environmental impact. And, as she spreads the message, she has become more secure in her chosen lifestyle. “The footprint of our food consumption alone is just massive,” Jo says. “When you start to dig into the supply chains of all the stuff we buy and how it gets to us, it’s horrific. The latest and greatest food and other products are shipped in from all corners of the globe, leaving a trail of issues like child safety, habitat loss, people dying of pollution and it’s all because we want to buy a health product or some piece of plastic stuff that will only last a short time. So I feel lighter in myself – I know I’m doing my best not to contribute to all that.” 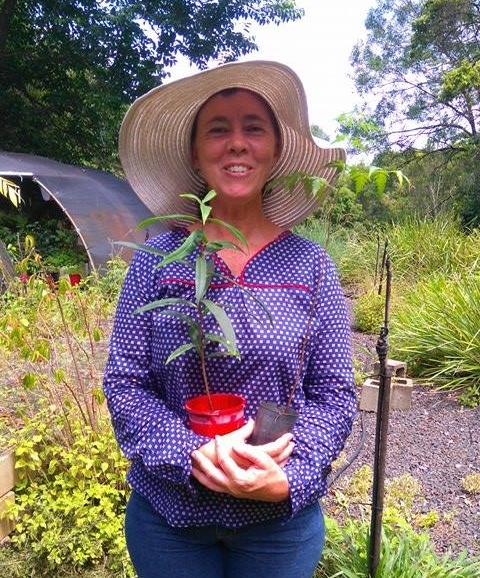 Jo is mindful that cashless living is not for everyone – and she hates the idea of preaching. But she would love it if more people considered just how much they need something before they buy it. “In the western world we’re driven so much by our desires so my main advice is very simple – before you buy something just ask is this something you really need or something you really want?” Jo says “If you just bought what you need – that would be enough to make the most incredible difference to our planet.”

“If you just bought what you need – that would be enough to make the most incredible difference to our planet.”

Read about Jo’s low impact lifestyle, and the effects it has on her life, on her blog https://jolowimpact.wordpress.com/. Jo is also on Twitter, Instagram and Facebook as Jo LowImpact.