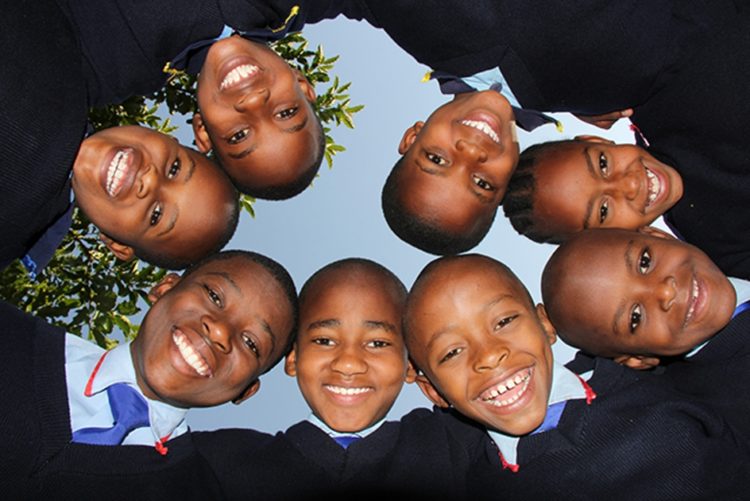 What inspires me: The smiling faces of our students every day they’re in school.

Best motto: “This too shall pass” – it’s my favourite quote and it has got me through a lot of very tough times.

Gemma Sisia sat at a Tanzanian school graduation ceremony two years ago watching 61 students graduate from their final year of high school. As they strode across the stage to receive their graduation certificates, Gemma beamed at the great smiles flashing across their young faces and delighted in the sight of their eyes dancing with dreams for the future. She couldn’t help but think back to when she’d first met these now promising young adults 12 years ago, when they were scrawny youngsters who signed up to be among the first students at The School of St Jude.

Gemma had met the graduating class members when they were bright, but poverty-stricken children, with little hope of completing primary school, let alone high school or university. Despite their brilliance, these kids were condemned to continue the poverty cycle into which they’d been born. That is, until they met Gemma – an adventurous, determined and compassionate Aussie awash with dreams of changing the world.

Gemma had come to Africa as a 24-year-old school teacher, brimming with dreams of helping the less fortunate. She signed up to volunteer at a private girls’ school in Uganda. While she relished the experience, she was frustrated that more students couldn’t access quality schooling. This frustration, combined with what she now regards as the blissful ignorance and optimism of youth, resulted in this young Australian woman determining to do something about it. She would see more African kids offered quality schooling. How? She’d start her own school. How hard could it be?

Several years later, Gemma stood on a patch of dirt her then Tanzanian boyfriend’s father had gifted her. She gazed at the overgrown paddock around her, visions of a future school swimming in her mind.

Recalling the moment today, Gemma laughs at her youthful confidence. “Even today I’d say The School of St Jude exists because I was young when I decided to build it,” Gemma says. “Before leaving for Africa, I remember selling my car, paying off my credit cards, closing my bank account, buying my ticket, having $200 left over and having not a fear in the world. When you’re that blissful mid 20s age, you’re in the prime of your life, you’re fearless and infallible and think everything’s going to be alright. And thank God I was like that because I had no idea what I was in for.”

Armed with youthful enthusiasm and helped by a team of volunteers from Rotary clubs home in Australia, Gemma set to work erecting the first classroom, despite never before having built more than a guinea pig cage. She had married the Tanzanian boyfriend who’d captured her heart, Richard Sisia, and they lived together in a tent on the school site. It wasn’t long before Gemma was pregnant with their first child.

Slowly, a structure with a roof and walls emerged from the tangled undergrowth to form the first School of St Jude classroom. Six months of toil, and one baby later, Gemma and a young school graduate volunteer from Australia, Angela Bailey, threw open the School of St Jude in 2002 to welcome its first three students. “We were just so excited to be open,” Gemma says. “We didn’t even think it was little. We were thrilled to be started.”

By the end of the year the students’ numbers had swollen to around 50 kids. By the second year the school had 100 students, who would have otherwise had no future beyond merely trying to survive. “[I remember] our first little children were now entering [year two] and you could see their confidence growing by the day,” Gemma recalls. “At morning tea and lunch time they kicked balls about and swung on swings, like carefree children everywhere, a far cry from their home lives of chores and responsibilities.”

The next year still more children applied for a School of St Jude scholarship. The following year still more. Parents and potential students began swamping the school gates on registration days to have their children enrolled for a chance to alter the course of their futures.

Gemma had to enforce a strict admission policy, providing schooling and boarding to those who’d proven their poverty, as well as their potential for academic success.

And with every new kid, came new funding requirements. They’d need new classrooms, new teachers, new school buses. Gemma would rally her network back in Australia to raise funds, with Australian families signing up to pay for students’ schooling.

Of course the growth didn’t come easily. Gemma had ongoing battles overseeing shoddy builders, with teachers who didn’t live up to her expectations, in raising the money to cover school buses and the ever-swelling numbers of students. She and Richard also had their own two boys to raise, and Richard also ran a safari company for tourists.

At one point, after the death of her father and the loss of her unborn child, Gemma felt the optimism that had characterised her for so long, evaporate. She questioned the point of it all – here she was helping just a tiny portion of the hundreds of thousands of Tanzanian kids who needed an education. But a friend gave her a reality check. “She helped me realise there was no point looking at the big picture – in Africa that’s the way to go crazy – but if I concentrated on the little picture, on improving the lives of a handful of children, of even one child, then I was doing my job.”

“If I concentrated on the little picture, on improving the lives of a handful of children, of even one child, then I was doing my job.”

By 2006, the first School of St Jude class had progressed through four years of schooling and was ready to sit the nationwide Year Four testing. Any student in Tanzania who fails this testing is denied a chance at continued schooling. For those who fail, there’s no chance of escaping the extreme rural poverty or garbage-ridden urban slums from which they’d come.

This was crunch time for the School of St Jude. The entire grade passed. “When we found out you would have thought we’d won the lottery,” Gemma laughs.

As that same class reached the end of their primary school years, Gemma and the School of St Jude board decided to extend the school to also offer high schooling. Then, as that same class finished high school two years ago, the board also agreed to fund their university placements.

Today, more than 50 of that year group of 61 graduates are at university studying subjects ranging from aeronautical engineering to physics and medicine. Gemma says Tanzania is in desperate need of science education – most schools deem the cost of teaching science too expensive so simply forego it favour of subjects that are cheaper to offer. This has resulted in situations like Tanzania having just 94 gynaecologists to serve a population of 21 million women. For Gemma, it will be the uni graduates who have a real chance of changing the course of Tanzania’s future.

Most of that first pool of high school graduates took a gap year before beginning university to volunteer to teach at other schools. Gemma remembers watching one such student standing at the front of a class of around 70 students, a cracked blackboard behind him. The students, many of them taller than their new teacher, hung on his every word, rapt at the chance to learn from someone new and educated. Gemma couldn’t help but smile at the enthusiasm of both teacher and students.

She says the graduates relished the chance to offer other children a chance at what they’d been gifted through St Jude’s and their Australian sponsors. And, despite the difficulties of teaching such big classes with limited resources, and just a week crash course in how to teach, not one of the volunteer teachers dropped out. In fact they asked if they could  extend their volunteer teaching jobs for another three months. Now every graduating class at St Jude’s completes a year’s community service before attending university.

While there are so many individual stories of students plucked from the most extreme poverty to get a real chance at life, the story of Winrose is the first that springs to Gemma’s mind. Winrose’s mum had died when she was 10, but she’d continued to excel at primary school – a near impossible feat in Tanzania. How had she managed to continue her schooling at all, let alone do well, Gemma pondered?

Gemma came to learn that, before Winrose’s mother had died, she’d taught Winrose how to sew. Making the most of this knowledge, and desperate to learn, Winrose would approach her school teachers and offer to sew their clothes in exchange for textbooks and tutoring. After being accepted into the School of St Jude and excelling throughout her schooling, Winrose accompanied Gemma on a trip to Australia where she met the Australian couple who’d funded her education. “It was so emotional,” Gemma says. “It always is when a sponsor meets their students.” Without the sponsors’ help, the bright young woman before them would have been sentenced to a life of poverty and domestic drudgery. Instead, Winrose is now working for the School of St Jude in a marketing and sponsorship role.

Without the sponsors’ help, the bright young woman before them would have been sentenced to a life of poverty and domestic drudgery.

Winrose is one of about 2000 kids who’ve now attended St Jude’s, which currently houses about 1400 boarders, provides 1.2 million meals a year, and has 600 computers, 26 school buses and a staff of 300. The school also welcomes visitors to stay in onsite accommodation where they can visit the school and see its workings firsthand.

For Gemma, looking back on the past 15 years of dedicating her life to the School of St Jude – the tears, the bloody hard work, the triumphs and the lives changed – Gemma has no regrets: “When you work with the students every day, there’s no way you can have regrets,” she says. “Some days are harder than others – and we’ve had our challenges. But at the end of the day we are providing a free, high-quality education to more than 1,800 students who would not have had a chance to attend school – and that’s why I do it.”

Find out how you can support a student at the School of St Jude, or arrange a visit to the school, by visiting www.schoolofstjude.org