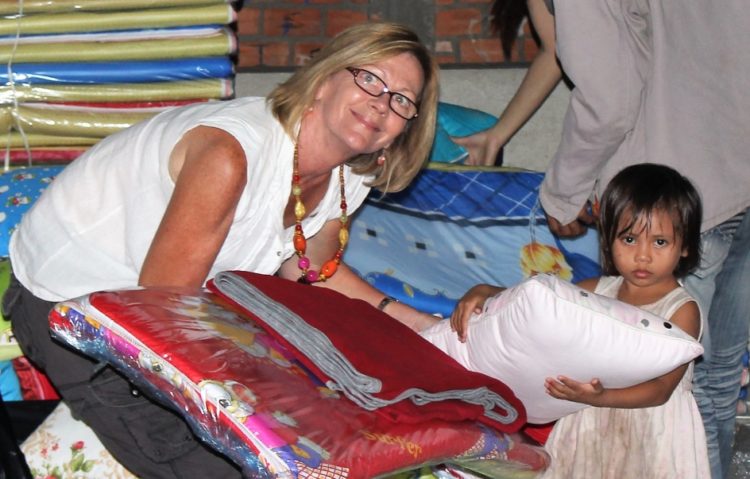 What inspires me: The resilience, determination and hope that every young girl who walks through our door has, regardless of all their adversities and challenges. Their smiles and achievements makes my heart sing.

Best advice: I have two phrases I live by, one from Mother Teresa and the other from Gandhi: “Not all of us can do great things, but we can all do small things with great love.” Mother Teresa. ““Be the change you want to see in the world.” Gandhi.

A teenage girl stood on a Cambodian street corner in the heart of Phnom Penh’s tourist district. Her eyes darted from side to side, avoiding the gaze of the old, overweight western man before her. As tourists swirled past into the night, the girl negotiated her price. Deal made, the man lumbered across the road to the nearest hotel to book a room.

Across the road, Australian Julie Dowse watched the exchange. She knew it was commonplace for relatively rich westerners to take advantage of young Cambodian girls’ poverty for sex. Julie was working in Cambodia to help girls facing exactly this predicament. And tonight she’d had enough.

She marched over to the girl while the man booked the hotel room across the street. Was she ok, Julie asked? How could she help? “I have to do it,” explained the girl. “I need $50 to pay my rent.” Julie offered to pay the money herself. And, as the man emerged from the hotel, anger flashing in his eyes at the sight of Julie with his prize, Julie and girl disappeared into the night.

The girl led Julie to a poorer area, away from the tourist strip, where dozens of women sold their bodies for sex. On the tourist strip they may earn $50 for a sexual encounter. Here it was more like $5. Julie spoke to a handful of the young women. She wanted to sweep them all into her arms and make it better. She took about six of them with her, gave them some money for a night off and fed them. “I wanted to understand what life was like for them and why they did this,” Julie says. “Some had been abandoned, some put to work by their relatives – all of them had devastating stories. And none of them had been to school.”

The realisation that a lack of education was the common element among these girls got Julie to thinking. While she was proud of the work she was doing helping Cambodia’s young prostitutes, surely it made more sense to prevent their selling sex in the first place. And perhaps education could be the answer. With this in mind Julie and her husband Geoff went on to launch the charity AusCam Freedom Project. But Julie’s story reaches further back in time than a chance meeting with a teenage prostitute on a Cambodian street corner.

A life of service

Even as a kid Julie knew she wanted to help people. She remembers reading about Mother Theresa when she was 13-years old and deciding that she’d dedicate her life to helping others.

She went on to do just that. She became a foster mum for 15 years. She studied social welfare. She worked with the Australian Red Cross helping pregnant and homeless teenagers, and she volunteered in an orphanage in north-eastern Thailand. Each experience was heartbreaking, yet filled her with a sense of purpose.

Eventually, Julie decided to self-fund her return to Thailand, along with her son Ben, to volunteer at a home for children with HIV AIDS. “How do you describe holding a baby or a small child in your arms as they take their final breath?” she says of her time at Agape Children’s Home. “How do you describe loving a child knowing they were not going to live much longer? I think that six months I was at Agape was one of the hardest times of my life. We lost around 12 children over that time and it seemed like we were constantly having a funeral. It does sound like a very dark space, but I can tell you that this home exudes so much love and the home was filled with some amazing and incredible people.”

While working in Thailand, Julie heard disturbing tales of the trafficking and exploitation of young women and girls. “It began tugging at my heart and I felt that this was something I needed to learn and understand more about,” she says. So impacted was Julie by the horrendous tales she heard that, upon returning to Australia, she enrolled in a master’s program through the graduate school of policing, from which she graduated with a Master of Arts in Child Protection Investigation. “I was ready – or so I thought,” Julie says.

Several months after her graduation Julie came across a job advertisement for a position with a large human rights organisation in Phnom Penh, Cambodia. The position was for a technical advisor to develop a model of care for more than 300 women and children who had experienced human rights abuses. Many of them were recovering from human trafficking, commercial sexual exploitation and horrific incidences of rape.

“When I read the job description it was like it was written just for me,” Julie says. She applied, was interviewed three times and, within a few months, had settled her son Ben in his first flat, packed up her home, and left with her new husband Geoff for a new life in Cambodia.

Many of them were recovering from human trafficking, commercial sexual exploitation and horrific incidences of rape.

While fired up with enthusiasm for her new job, nothing could have prepared Julie for the reality of the work. “Those first few weeks were such a mix of emotions,” she says. “I couldn’t believe I was actually now working within the anti-trafficking field I had dreamt so much about. I wanted to be excited, but the reality of the situations for the young women and children I met was also devastating. The stories I heard of what so many children had endured were almost soul destroying.”

In those first days of the job, she cradled a four-year-old girl in her arms. The girl had been raped. “It doesn’t matter what you learn from a text book,” she says. “You can’t prepare your heart for something like that. That was heart-wrenching – for something like that to happen to a beautiful innocent child.”

“It doesn’t matter what you learn from a text book. You can’t prepare your heart for something like that.”

As they established themselves in Cambodia, Julie and her husband Geoff encountered an orphanage which they decided to support. They invested their time and expertise, throwing their hearts and dollars into the home, which housed more than 70 children. They renovated with their own hands, built bedrooms, installed a clean kitchen and eating area, bought school uniforms and beds, paid for the monthly rice supply and eventually also paid the orphanage’s $US600 monthly rent. However, while they knew their funding should cover the costs of feeding the children, they continued to hear tales of children from the home turning up in hospital with malnutrition. Something wasn’t right.

One Sunday, a year after Julie and Geoff began supporting the orphanage, a group of four girls pulled them aside. They whispered that the orphanage owner had physically and emotionally abused them, severely, and repeatedly. “We were confronted by the reality that this man, a Cambodian, was actually abusing the children in his care and that we were being taken for a ride,” Julie says. “We were devastated.”

After Julie and Geoff informed the social welfare authorities of the hidden horrors at the orphanage, the home was shut down. Many of the children returned to family members but, for many more, there was nowhere else to go. “We supported several of the adolescent girls who were unable to return home to live in a dormitory and paid the associated costs for this, and for them to go to school,” Julie says. “We realised how challenging life for them was out of the confines of the institution they had spent many years in. They had limited life skills and it was obvious they required more intensive support.”

Taking matters into their own hands

Reeling from the orphanage scam, but still wanting to help, Julie and Geoff decided to take matters into their own hands and launch their own charity – the AusCam Freedom Project. “We had so many experiences which profoundly impacted us during our first 12 months in Cambodia,” Julie says. “Once you have witnessed what we had, you have two choices. You either walk away or you do something. We didn’t set out to change the issue but we did set out to change the life of a girl, one girl at a time.”

The duo opened the Transitions Life Centre in February 2012 to home the unwanted teenage girls from the orphanage. The home helped the girls from orphanages and other residential homes to receive the life skills, personal development, counselling and education to be able to safely integrate back in to community.

“During this time we also began an outreach program in the area well known for prostitution as well as with other young women and girls who were surviving through the street economy,” Julie says. “We often would have 50-60 young women turning up to our community centre for hot showers, something to eat and free reproductive health guidance.”

Around the same time, Julie met the women selling their young bodies to survive on the streets of Phnom Penh. It was then that she recognised the power of education to halt their negative spiral. So, in December 2013, following further research and meetings with the Cambodian Department of Education, Julie and Geoff launched Freedom Education Scholarship program for girls and enrolled 25 at-risk girls in school. They also provided financial support to the students’ families, to prevent them pulling their daughters out of school to go to work.

One girl at a time

“We believe if you educate a girl she can change her world,” Julie says. “We have made a lifelong commitment to the girls of Cambodia and my long-term vision is to see our programs operating in other Asia Pacific regions where there are known hotspots for trafficking and exploitation. But for now, one step at a time, one girl at a time.”

You can find out more about AusCam Freedom Project and support its life-altering work by visiting its website www.auscamfreedomproject.org