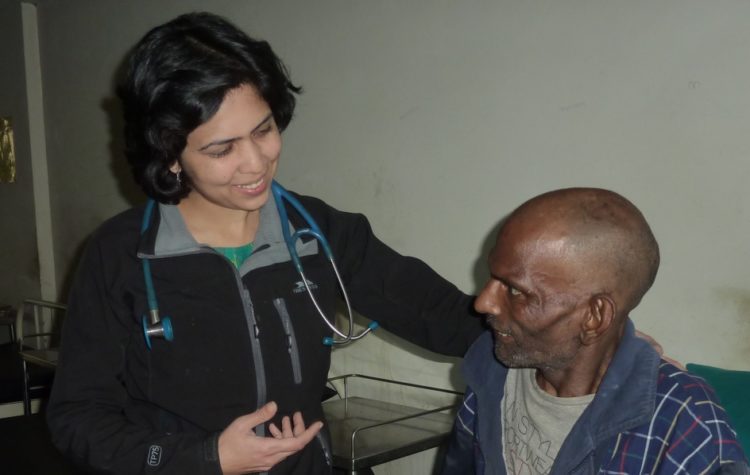 Who inspires me – Jesus Christ and his sacrificial love for all people.

Motto – What really matters is not how much we achieve, but how deeply we care.

Savita Duomai was nervous. Before her stood a transgender patient with HIV AIDS. While Savita had spent years helping India’s HIV patients as a medical consultant of the care facility Shalom Delhi, this was her first transgender patient. Shalom had become renowned not only for its medical care, but also for its holistic and compassionate approach to healing. And recently, it had begun reaching out to transgender HIV patients to extend its care to this highly marginalised group.

The patient was part of a community known as Hijras. Hijra is a term given to eunuchs, intersex people and transgender people in India. They face face widespread prejudice and ostracism.  Like most Hijras, this patient had undergone ritual castration and, like many other Hijras, the patient had contracted HIV.

“I’d never been exposed to transgender people before so I was nervous,” Savita says. “But as I got to know them and they got to trust us they started sharing their stories. That helped us understand them deeply. A lot of them have come from neglect, poverty and violence. There’s inner turmoil, mental health issues, problems with addictions – and then HIV on top of that. Those stories really broke us up inside. Learning their stories and understanding them transformed us as well.”

“Learning their stories and understanding them transformed us as well.”

Love as a motivator

Savita had longed to help others for as long as she could remember. Even as a kid she’d possessed a desire to serve. As a 13-year-old she had an experience she describes as a “personal encounter with a God of love.” She knew then that she wanted to serve others to share this love.

This desire saw a young Savita take particular note of the increasingly disturbing news reports she witnessed regarding the rise of HIV AIDS in the 1980s. “I saw the extent of their suffering and something inside of me knew this was my purpose,” she says. “I wanted to bring hope, healing and love.”

Driven by this deep sense of purpose, Savita enrolled in medical school to become a doctor. She completed a post graduate diploma in paediatrics and a post graduate degree MD in community medicine. During her schooling she was invited to work at the Emmanuel Hospital Association, which would found Shalom Delhi in 2001. Here she met the HIV patients that had sparked her medical studies years before. And again she felt the inner knowing: “Something inside me said this is where you’re meant to be,” she says.

“I wanted to bring hope, healing and love.”

Yet Savita’s studies also exposed her to the worst of suffering. So disillusioned did she become by the cases of sick children that she encountered through her work that she began to question the existence of God. “I thought if there is a God, why is there so much suffering?” she says. “I wrestled with my belief in God. It was one of the darkest periods of my life as it had always been my belief in God and doing God’s work that had driven me.”

Eventually Savita knew she had a choice – turn away from God and be swept up by the world’s suffering, or trust in God in spite of what she’d witnessed. “That was a defining moment in my life,” she says. “If I didn’t have the belief and hope, the suffering would break me. I chose to believe and that is what keeps me going. I chose to allow God to work through me.”

After completing her studies and starting work at Shalom full-time in 2007, Savita felt the certainty of her purpose return. For here was a community of caregivers that embraced the values she held so dear. It was not simply a medical facility for people with HIV, but a holistic care provider that helped improve patients’ whole lives, and that of their families.

Seeing the value in every life

Many of Shalom’s patients arrive in advanced stages of the disease – emaciated, weak and desperate. Most have already faced ostracism from their communities. Few can hold down a job. They are not only sick, but devastatingly poor. They face the daily battle of survival, not only for themselves but in raising enough money to feed their families.

“There’s a lot of stigma around HIV,” Savita says. “These people are already poor and HIV drives them further into poverty. We help them with medical and nursing teams and, after that, we help them through our home care service. We help their children and adolescents – who are also going through a lot of trauma. Some are HIV positive themselves. We become like family, like a support network that relates deeply with them and feels their pain. In the long-term they begin to trust us. There’s this deep caring. We counsel them and help them see their life has value. We believe each one of us has immense value. And we involve their family in the care process as much as possible.”

Recently Shalom has also introduced a livelihood program which equips patients with the skills they need to make their own handicraft products, which Shalom helps to sell to prevent their slide back into poverty. Women have learned sewing and begun making bags, cushion covers, table mats and more.

Savita cites the case of a woman with HIV, whose husband had died from the disease. Not only facing the stigma of being a widow with HIV, the woman also fretted over how to feed her four children, one of whom also had HIV. Desperate, the woman enrolled in Shalom’s livelihood program. “She had no skills, no confidence, she was overburdened with her situation. She was desperate,” Savita says.

The woman began learning how to use a sewing machine. Her children joined Shalom’s children’s program under which they received counselling, character development and life skills training, and recreational classes. As the woman sewed, she opened up to the women around her and shared her story. She found support not only in learning a craft to become financially self-sufficient, but in talking with people who cared.

Slowly, very slowly, she managed to eke out financial security. Her children are now in school. “Now if you see her, her face is radiant,” Savita says. “Before she didn’t even know how she’d feed her family the next day. Now she is not only feeding them but she has dreams for their futures. To see that transformation of her life and that of her kids, is just so beautiful.”

She cites the case of a transgender patient from a well-to-do family who was raped as a young boy. As he grew he noticed a growing attraction to other boys and knew that would never be accepted among his family. Facing poverty and ostracism, he ran away and found acceptance in the Hijra community. He underwent the Hijra ritualistic removal of the genitals and transitioned as a transgender woman.  And then became very sick.

This patient was diagnosed with HIV and tuberculosis. Then, she experienced an unusual reaction to medication which resulted in deafness. Already isolated, she became severed from the rest of society, shunned even by other Hijras.

Life seemed hopeless. Until Shalom welcomed her in. She started in their hospital ward receiving medical care. As she healed physically, she also learned to crochet. Shalom started selling the patient’s work so she earned some money from the sales.

Her self-confidence improved, along with her health. And eventually she left Shalom’s care with the capability to keep her life on track herself. While no-one fully recovers from HIV, they can learn to live with the disease. This was one such case.

Inspired by those in her care

Savita says she is continually inspired by such stories. “Knowing the people we serve, we’ve been inspired by them so much,” she says. “They have such courage. To come from such circumstances and transform is incredible. It makes me realise the more we have, the more responsibility we have to serve.”

So, despite ongoing struggles with funding, despite the spotlight moving on from HIV AIDS to other concerns, Savita will remain with Shalom. She will continue to work with the team and patients she has come to love. She will continue to help others, the responsibility to serve burning strong through her veins.

“… the more we have, the more responsibility we have to serve.”

For more information about Shalom Delhi, and to support their work my making a donation, visit the website www.shalomdelhi.org