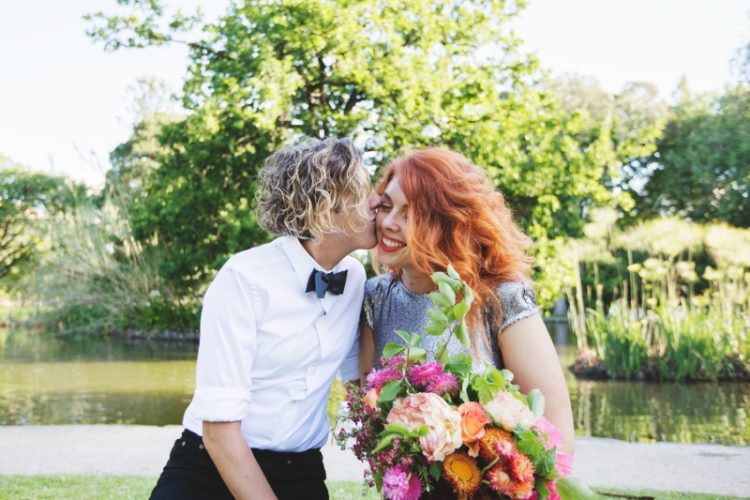 The lovebirds stroll towards their character inner-city home, arms overloaded with fresh flowers and grocery shopping, their two Italian greyhounds bouncing alongside them. Kicking off their thongs they fix a green tea and retreat to the front porch, where they snuggle side by side on the couch, sneaking affectionate smiles. They are the very picture of loved-up newlyweds. Yet, when this couple married recently, they set tongues wagging in their hometown of Geraldton, in Western Australia’s Mid West. While Tamara Walker and Sarah Walker (nee Andrews) feel like any normal couple, they are the subject of discussion for one reason – they are gay. And they were the 16th couple in Australia to marry under Britain’s new law to allow same-sex marriage. Taking advantage of Sarah’s English passport, they tied the knot at the British Consulate on a sunny spring day in Melbourne this year.

When this couple married recently, they set tongues wagging in their hometown of Geraldton, in Western Australia’s Mid West.

The wedding cemented their love for each other in ways even they didn’t predict. And yet same-sex marriage can spark an outpouring of antagonism among many. In an age where many do not bother to marry, and in a country where same-sex marriage is outlawed, this couple risked criticism and scorn by making their union legal. And, despite very different personalities, they travelled remarkably similar individual paths to reach their current state of bliss.

Growing up in the regional city of Geraldton, Sarah always felt she was a bit different. She couldn’t understand her friends’ obsession with boys as a teenager. She was much more into horses and books. Still, she guessed she wasn’t mature enough yet and imagined the boy obsession would sink in soon. She hadn’t even considered she may be gay. No-one was gay in Geraldton. “Growing up in Geraldton it would be the worst thing you could be,” says Sarah. “It was like a worst case scenario.”

On the other side of the country, in Geelong, a teenage Tamara felt similar feelings of awkwardness. She had the odd boyfriend and she certainly didn’t identify with the lesbian women she’d seen open the Sydney Mardi Gras celebration as ‘Dykes on Bikes’. They looked so angry, so militant. She felt confronted, a little scared at the sight of them. Nope that couldn’t be me, she assured herself. And yet, at a party one day, she kissed a girl. And life would never be the same again. “The next morning I woke up and saw the world in a whole new way,” she says. “It was like before everything had been in black and white and now everything was in brilliant colour. It was this feeling of equal parts excitement and equal parts fear.”

“It was like before everything had been in black and white and now everything was in brilliant colour.”

Tamara started leading a split life. By day she was a diligent university student, by night a regular at gay nightclubs. She revelled in being surrounded by other gays – she could finally drop the mask and be herself.

Back in Western Australia Sarah had decided to indulge her passion for adventure by moving to London. And here she found her perceptions of sexuality challenged. London was a glorious melting pot of different people, races, forms of sexuality. It wasn’t long before she was swept up in a fiery love affair with her first girlfriend. She attended Gay Pride parades, cut off her hair, got a tattoo. Like many first love affairs, this was a relationship of passionate highs and devastating lows. Despite its tumultuous nature, Sarah finally felt as though life made sense. “It just made everything fall into place,” she says. “When I fell in love for the first time it all made sense why I’d felt so different.”

London was a glorious melting pot of different people, races, forms of sexuality.

It would be five years before Sarah conjured the strength to tell her parents. “I’d been drinking one night and my girlfriend made me tell them,” Sarah says. “So I sent them an email and it was so liberating. Then it took a couple of days for them to respond and I thought they’d disowned me. But in the end they just said they were glad I could tell them.” Old uni friends took the news a little harder and became muted by awkwardness. Yet most came to accept Sarah’s choice.

The story was similar for Tamara, who told her mum while feeling miserable about breaking up with a girlfriend. “She was fine about it,” Tamara says. “I was prepared for her to be in tears and for me to be ostracised but it was ok.” She didn’t officially ‘tell’ her dad, instead just started to bring girlfriends to family events until he figured it out for himself.

“[Coming out] was so liberating.”

It would be another 10 years before Tamara and Sarah finally met. They were both living in Geraldton when mutual friends introduced them. The attraction was instant, yet they were both cagey about making a move.

“I’d never dated anyone of Sarah’s ilk before,” Tamara says, popping her arm around Sarah’s shoulder. “Sarah is so elegant and feminine.” Gazing back at her wife, Sarah agrees: “I’d always dated more feminine women but Tamara is more sporty, more practical. But when you meet the right person you just know. It was so easy.”

The two would invent social occasions to provide an excuse to see each other. Sarah would visit Tamara’s often, on the excuse her house was too hot and she needed Tamara’s air-conditioning. Yet the relationship remained platonic. “I remember thinking I really want to woo this girl,” Tamara says. “But I was fed up with being the one who always had to initiate a relationship. So we had a few group dates and I was trying to read her energy to see if she felt the same – I didn’t want to misjudge her interest.” Tamara finally conjured the courage to organise a date and, two months later, they moved in together.

“I just felt like we were really meant to be, we never fight, we always talk each other up, we really complement each other,” Sarah says. “Before I was with Tamara I always had this feeling of anxiety, of restlessness, but now with Tamara that’s disappeared. I felt really strongly that I’d met my future wife.” Tamara agrees: “Our energy is just better when we’re together. Sarah helps me grow as a person and focus on who I am. We work on being better people individually and as a couple.”

“I really felt strongly that I’d met my future wife.”

For two people who’d once considered marriage an outdated institution designed to oppress women, they were surprised by the strength of their desire to make a formal commitment to each other. “As a lesbian I thought marriage wouldn’t be in my future but then to meet someone like Sarah, I just knew that I wanted to make this 100 percent commitment,” Tamara says. Well aware of Sarah’s preference for intimacy and no-fuss, Tamara secretly bought a ring, prepared a gourmet dinner at home and proposed by the light of the open fireplace last winter.

Tamara and Sarah had already been in Melbourne for 10 days before the wedding – a pre-wedding honeymoon which had passed in a glorious whirl of exploring the countryside in a combie van, overnighting at swanky hotels, indulging in quality food and wine and being seduced by the beauty of nature.

Then, on October 30, they woke to a warm spring day, blue skies, birds chirping. After preparing separately, they met at the embassy for the wedding ceremony. Tamara’s eyes mist with tears as she recalls the sight of her stunning bride. “I just saw her all dressed up and thought this is the real deal,” she says. “It was the best day ever. We had about 20 very close family and friends, had the most beautiful ceremony, an amazing dinner in a private dining room, music, dancing, speeches. It was really stripped down and simple and I think that just amplified the emotion of it. Sarah’s mum said it was the most romantic wedding she’d ever attended.”

Sarah’s eyes comes alive and her face melts into a smile as she recalls the special day. “After the embassy the whole wedding party just walked the streets of Melbourne with a speaker playing music and we were on such a high. My nephew had a guitar and played it in this park while we waited for the reception. And then we had the most amazing reception. Everyone had the best time, people were really connecting, it felt really transformative.”

They flew home to Geraldton on a high that is yet to subside. Marriage has strengthened their relationships in ways they’d never dreamed. And it has made them all the more convinced that everyone should have the right to marry, despite their sexuality.

“Marriage just brings this real sense of responsibility that I hadn’t anticipated,” Tamara says. “Making that commitment felt really liberating, I felt so much more protective and supportive of our relationship. Marriage really unlocks the closed parts of your heart. It forces you to show, and really commit to, your love for each other. We came back ten times more in love. It did feel really different to have made this promise to someone. And I think everyone should have the opportunity to commit to their love for each, no matter what their sexuality.”

“I think everyone should have the opportunity to commit to their love for each, no matter what their sexuality.”