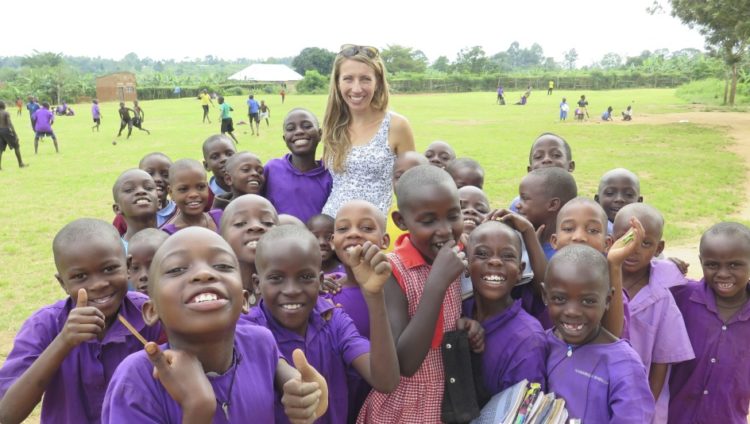 Who inspires me: Dominic and Rose, the founders of KAASO, are my absolute inspiration. What they have managed to create from nothing is just mind blowing and every day I am grateful to have them in my life.

Best advice: “Let the world change you, then you can change the world.” To me, this quote emphasises the importance of taking the time to absorb the world around you before launching in and working out how best you can play your part in making a difference.

Emma Outteridge was standing in the Nice Opera House on the glittering French Riviera, champagne glass in hand, a little black dress adorning her svelte frame, and mingling with VIP guests of Louis Vuitton here to watch a yacht race for the world’s sailing elite. This young Kiwi woman was living the high-life, hobnobbing with European high society in her role as events manager for the luxury Louis Vuitton  label. Yet Emma’s mind was elsewhere – thousands of miles away in a remote poverty-stricken village in Uganda. Emma had just returned from six months’ volunteering in Uganda, and found herself smitten by the people, particularly the orphans at the village school.

While the people around her discussed yacht prices and champagne varieties, Emma’s mind wandered, her face warming into a smile as she recalled the Ugandan orphans – the wide smiles that flashed so readily upon their faces, their shining eyes and their thirst for education. She realised the recent end of her six-month volunteering stint didn’t have to mean the end of her relationship with the village. Since that day seven years ago, Emma has gone on to help dozens of orphaned children in the village to access the education they’d otherwise have been denied.

Rewind to 2005 and Emma was spending the ski season in Aspen, Colarado. As the snow fell outside, Emma took a break from the slopes to watch the Hollywood film Hotel Rwanda, about the Rwandan genocide. Emma was staggered by the severity of what had happened in Rwanda – up to a million people slaughtered in 1994 – and couldn’t believe she’d known nothing about its occurrence.

Having spent much of her life living on her parents’ yacht travelling the world, Emma’s had considered herself worldly. While she would have been only a child herself during the genocide, she couldn’t believe she didn’t know such atrocity had occurred in her lifetime.

Emma was also struck by the fact how, through sheer chance, she’d been born to privileged parents, while children in Rwanda had, through no fault of their own, been being born into civil war. Emma declared that she’d do something to help the African people. She didn’t know what, but she was determined to make a difference.

Emma was staggered by the severity of what had happened in Rwanda – up to a million people slaughtered in 1994 – and couldn’t believe she’d known nothing about its occurrence.

In the meantime, life charged on. Emma got a job working for Louis Vuitton on the America’s Cup in Valencia before finding work working on flotilla yachts in the Greek Islands. Yet, while she read every book about Africa she could find, she made no move to make the difference she’d dreamed of.

Eventually Emma realised she’d spent years talking about how ‘one day’ she was going to do something. She realised it was up to her to make ‘one day’ arrive. She approached a fellow Kiwi friend working on yachts, Cherie Broome, and ask her to join her on volunteering adventure in Africa. “We were living on boats in the Greek Islands and life was amazing but I just knew I wasn’t going to be complete until I did it,” Emma says. “I asked my friend to join me and she just said ‘yep’, so we went.”

They knew they wanted to volunteer with an organisation which directed the bulk of volunteers’ funds directly to the recipients. “We stumbled across this tiny grassroots organisation called Kids Worldwide, which had no fees and any money raised went direct to the projects,” Emma says. Kids Worldwide supports projects in 17 developing countries and Emma applied for positions in East Africa.

In 2009 they were accepted to volunteer at the Kabira Adult Attention and School for Orphans (KAASO) in Central Uganda. At the last minute another Kiwi girl, Kirsty Pelenur, whom Emma had never met, decided to join them. “We laugh now that we went on a blind date to Uganda,” Emma says.

“We laugh now that we went on a blind date to Uganda.”

As their plane descended into the Ugandan capital of Kampala, Emma, Kirsty and Cherie worried if there would be anyone there to meet them. “We had absolutely no idea what to expect,” Emma says. “But when we got there [school co-founder] Dominic [Mukwaya] was standing there with the biggest smile you’ve ever seen.”

From the airport they embarked on a nine-hour drive over pothole-strewn dirt roads to the Rakai district where the village of Kabira was located. Stepping out of the car they noted a handful of ramshackle buildings amid the dense jungle foliage. There was no electricity, no running water. This was to be their home for the next six months.

Dominic and his wife Rose Nanyange, both teachers, had founded KAASO in 1999 to school orphan children. The HIV/AIDS epidemic had torn through the region, decimating much of the working-age population and leaving scores of grandparents looking after their orphaned grandkids. Dominic and Rose opened their school to 12 of these orphans, housing and educating them in a single room, whose roof would collapse after rain.

Despite the lack of funds, KAASO became so popular that by the end of the year 49 orphans were enrolled. Soon parents of non-orphaned kids wanted in on the superior education being offered here. The school grew to take in some 600 children, including 350 boarders. Parents who could afford to pay fees did so, helping to also fund the schooling of the orphans in what became a sustainable social enterprise.

While the three Kiwi girls volunteered around the school, they found themselves captivated by the kids. “There’s so much laughter,” Emma says. “They are just happy with whatever they’ve got and make the most of it.”

Among the hundreds of students was a 12-year old boy name Henry. “Henry was in his last year of primary school and was an absolute superstar,” Emma says. “He was so intelligent and helpful and considerate. He had the biggest widest smile and was desperate to learn.”

But Henry had a problem. His father had died when he was young and his stepfather refused to fund Henry’s education. There was no one to pay the $1000 a year it would cost for him to leave Kabira to board and study at the closest high school.

Desperate to study, Henry approached  Emma with a letter, asking if she could help. With little savings and no job lined up after her departure, Emma couldn’t commit to paying $1000 a year for six years to fund Henry’s education. “But seeing him every day and imagining his future just killed me,” Emma says. “I asked what would happen to him and Rose said ‘we’ll pray for a solution’ and I said ‘and what if that doesn’t work?’ and she said ‘we’ll just keep praying’.”

Eventually Emma could bear it no longer. She phoned her parents who were travelling on their yacht off West Africa, sailing from Gibraltar to the Canary Islands. “I said ‘we have to help Henry’,” Emma says. “And they said ‘who’s Henry?’” After sharing Henry’s story, Emma’s parents agreed to help her cover his fees.

Hanging up the phone, Emma ran through the rain into the classroom and called out to Henry. She could fund his high school education, she told him. “He just looked at me in shock and disbelief and then landed me the biggest hug,” Emma recalls. “He desperately wanted to write to my mum and dad to thank them – this boy in a Ugandan village couldn’t understand they were living on a boat.”

Elated, Emma left the classroom. But it wasn’t long before a thought emerged. How many others were there like Henry?

Emma sat down with the school’s co-founder, Rose, and they came up with a list of 18 promising kids with career dreams who wouldn’t be able to access high school without funding support. Emma shared Henry’s story via email and social media to her friends and networks, and offered the chance for others to sponsor a child through high school. Seven more sponsors signed up.

After her six-months volunteering, Emma returned to work on yachts, but each year she’d return to Uganda. She’d spread word of the village which had captured her heart to the European sailing elite. And they jumped at the chance to help Emma make a difference.

Today, seven years later, Emma’s advocacy, has resulted in 32 kids having the chance to attend high school. She’s also raised $10,000 to convert a school building into accommodation for 100 girls, and establish and equip a library and computer lab. And this year she raised $40,000, which has bought the school a new bus.

While at first guilty at leaving the village behind her to pursue the high-life aboard yachts, Emma came to realise it was her ability to share the village story with people who could afford to make a difference where her real power resided. “I was so moved by what I found in that dusty little village and juxtaposing that with the glittery sailing world,” Emma says. “I thought it had to be one or the other for me – and that I had to choose. If I’d chosen to renounce the world and live in the village, sure I could help, but my real strength has been in going out into the world and speaking about it.”

“My real strength has been in going out into the world and speaking about it.”

Last year Emma returned to Uganda to watch Henry graduate from high school. Watching Henry stride onto the stage to receive his graduation certificate, Emma felt her heart sing with pride. “Sometimes I wo­­­­­rry that what we’re doing is too small – it’s only 32 kids – but looking at them graduating, it seemed so worthwhile,” Emma says.

Henry is now at university studying to become a medical laboratory technician.