What inspires me: Watching people enjoy the ocean when they may not otherwise have had the opportunity.

Best advice: Be the person you would want to be best mates with.

It’s a sparkling summer day on a Perth beach as a 12-year-old boy contemplates the ocean before him. The boy is autistic. He has a brain injury. He can’t speak or hear. And a feeding tube is inserted permanently into his stomach.

The boy is about to attempt surfing.

The boy’s family huddle nervously around as he is carried into the ocean and placed, sitting, on a surfboard. A volunteer surf instructor sits tandem on the board with him, and it’s not long before the duo catches the first wave.

The boy’s face erupts into an enormous smile, and he shoots his arms into the air in triumph. His mum and sister and brother, all surfers, are in tears. They had never dreamed their boy would be able to experience the exhilaration of surfing.

But, thanks to a new Perth charity, Ocean Heroes, this boy and hundreds of other autistic kids now have the chance to hit the waves. And, in doing so, they are not only experiencing a one-off thrill but revealing major shifts in their personalities. Once shy, anxious and depressed autistic kids are coming alive with the joy of surfing and blossoming with a newfound confidence that is reshaping their lives.

For Ocean Heroes directors Luke Hallam, Sam Moyle and Tom Johnston, the results have been mind-blowing. And they’ve become hooked on the joy of sharing their love of surfing with autistic children. But just how did this trio of young men come to launch a charity?

Rewind eight years and Luke found himself taking on an unusual client in his job as a personal trainer – a shy, brown-haired, 8-year-old girl with autism. The girl’s mother wanted to keep her daughter physically healthy and enlisted Luke to teach her daughter in the gym. So successful were the training sessions that the girl’s mum spread the word. It wasn’t long before Luke found himself training 20 to 30 autistic kids a week.

With no experience in dealing with people with disabilities, Luke says there were some “hairy” moments. But he came to admire the kids and their families. Which got him to thinking. What else could he do to help them? As a keen surfer himself, Luke wondered how the kids would fare in the waves?

He took to Google to see if others had experimented with surfing for autistic kids and stumbled upon a Californian charity, Surfers Healing, which introduced autistic kids to surfing. It just so happened the charity was coming to Australia in the next few months, so Luke booked himself a plane ticket to fly across the country to meet them. So impressed was Luke with what he saw that he and a mate, Sam Moyle, decided to fundraise to bring Surfers Healing to Perth. They raised $20,000 for the trip and, in March 2016, invited some 200 autistic kids and their families to the beach.

“It just went off,” Luke says. “It was the most epic day. The surf was really small and clean; we had all these families which created this big sense of community for parents. But the most amazing thing was watching these kids’ faces and seeing them light up when they caught a wave. When they catch a wave their persona, their mood, their personality changes, and something clicks, and they turn into these stoked little kids with no worries in the world. They just love it.”

So pumped were they by what they saw, that Luke and Sam, and a recruit Tom Johnston, plotted how they could bring more surfing to Perth’s autistic kids. Raising $20,000 for an American charity to visit was unsustainable, so they decided to take it upon themselves. A few months later they conducted their first trial day with a group of about 20 autistic kids.

“When they catch a wave … they turn into these stoked little kids with no worries in the world. They just love it.”

Again the results were phenomenal. “There are no studies about it, but when you see [the autistic kids in the ocean] you think there has to be something going on with the movement of the ocean, the smell of the sea, the feeling of the sand, the feeling of the board moving over waves,” Luke says. “Autism is really sensory and autistic kids feel things a lot more than what you or I would do. So there’s definitely something going on where the ocean has some sort of calming or exhilarating effect on these kids.”

So successful was the trial that the trio registered Ocean Heroes as a charity. They conducted their first event as a charity in September last year with 25 kids. The next month they had 50 kids. Each month the numbers grew until, at the end of the surfing season in April this year, they had 120 kids. 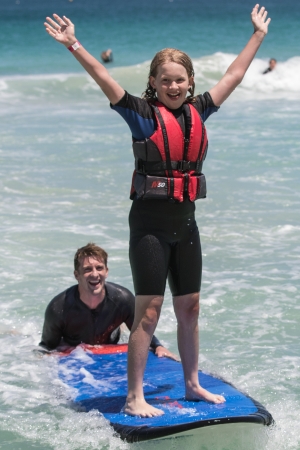 And as the kids continued to enrol, Luke, Sam, and Tom were overwhelmed with positive feedback from parents. “Parents say things like ‘my kid went surfing with you on Sunday and this week at school they asked their teacher if they could do more reading and writing because they believed they could do it,’” Luke says. “That sort of stuff is like absolute gold to us – the flow-on benefits from going in the ocean and catching a few waves is having such an effect on these families’ lives. It’s opening up so many doors for these people and these families who’ve got it really tough.”

Luke cites one case that is particularly close to his heart. He received an email from the mother of an autistic 8-year-old girl. The girl, shy and depressed, had attempted suicide attempt just days before the surf lesson. But, immediately after the lesson, the girl’s world transformed. “The mother wrote to us saying ‘going surfing changed my daughter’s life. Now she has a reason to live.’ Before she hated going to school, hated her teachers, hated getting bullied but she went surfing and met these people who wanted to hang out with her, took her piggy backing on the beach, did handstands on the board, and diving in and out of the waves. And she said ‘I want to live because I want to surf’.”

While not every kid experiences such a mass transformation, Luke says, at the very least, they have a whole lot of fun. “A lot of kids, especially those coming through adolescence with autism, also have high levels of anxiety and depression,” Luke says. “But we have parents emailing us saying that day of surfing was the best day of their kids’ lives and their whole personality has changed, their whole idea of the world has changed. Instead of doom and gloom and I can’t do this, instead of being ‘hi I’m Tom I’m autistic,’ it’s ‘hi I’m Tom I’m a surfer.’ Not every kid is totally changed, but even those are still like, yep, that was fun.”

Next summer Ocean Heroes plans to give surf lessons to 200 autistic kids a month in Perth, as well as make several trips to Western Australian rural areas. Volunteers have inundated them by putting up their hands to help, but they need to raise money for more surfboards, lifejackets, and wetsuits.

They are also excited about a partnership with the builders of a wave pool in Perth, and the guidance of one of their board members, Telethon Kids Institute Autism Research Team head professor Andrew Whitehouse. Together they plan to conduct formal research into the benefits of surfing on autistic kids, in the stable conditions of a wave pool. “It will be first research program of its type in the world,” Luke says. “Instead of people saying, right if this kid takes this pill their anxiety goes down, we can say right if this kid goes surfing once a week their anxiety drops down with no side effects. That’s really exciting for us.” While learning how to operate a charity, and also maintain their careers, has been challenging, Luke, Sam, and Tom have each gained so much from their time with autistic kids. They say they are also continually inspired by the parents.

“To see the love and the care that the parents of autistic kids provide is so amazing,” Luke says. “There’s nobody in the world with more patience and more love than the parents of an autistic child. When I look at them, I think that’s the sort of love and patience and care I want to have when I have kids. They really are inspirational.”

You can support Ocean Heroes’ bid to bring surfing to more autistic kids by donating at www.givenow.com.au/oceanheroes and follow their work on Facebook and Instagram at Oceanheroes.