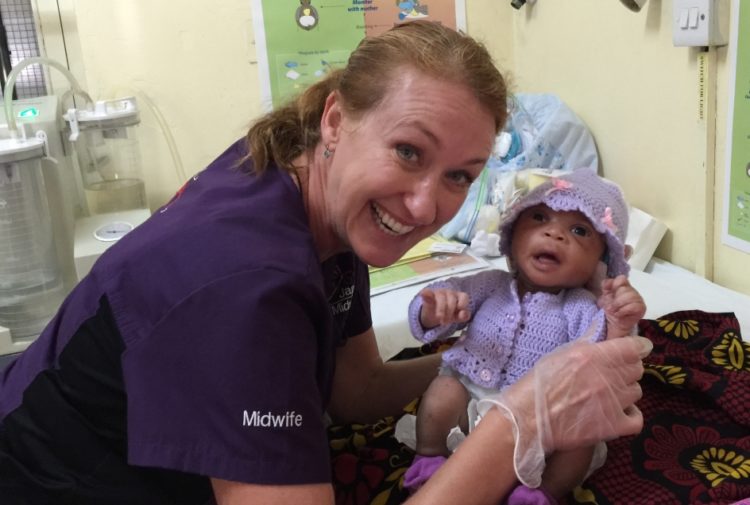 What inspires me: The midwives who work here every day – my sisters I see you and you inspire me.

Best advice: You get one shot at life – this is the main event – so live life with passion. Explore, inspire, go for it.

Jan Becker and her daughter Chase Becker strode into Amana Hospital in Dar es Salaam Tanzania for their shift as volunteer midwives in the labour ward. It had been a tough visit so far, with a severe midwife shortage making already trying conditions tougher. This morning, Jan and Chase arrived to find a single midwife attending eight women in late stage labour. Dozens more women endured the agony of labour in a nearby early labour ward.

They glanced at the bench at which dead babies are placed awaiting the morgue. Relief. No deaths overnight.

Assessing all the mothers, Jan moved to one mother on the verge of delivering while Chase attended another. Chase soon called out to Jan, a specialist in neonatal resuscitation. A newborn had no heartbeat. Jan started resuscitation but soon realised the baby was stillborn. Despite its perfect appearance, it had died weeks before in its mother’s womb.

With insufficient Swahili language skills to explain the death of her child to its mother, they awaited a local staff member to explain the baby had died. The mother, thinking her seemingly perfect baby was asleep, cradled its tiny form, tenderly shielding its lifeless eyes from sunlight streaming into the room.

While Jan fought back tears at yet another dead newborn, she attended to another labouring women, whose unborn baby’s heartrate was plummeting. Fearing another stillbirth, Jan accompanied  the mother to surgery for an emergency Caesarean. But as they  prepared for surgery the baby delivered naturally. This time, the baby survived.

Nearby another six women continued their labour. Jan and Chase and another midwife delivered nine babies in an hour. This was a busy but normal morning at a single hospital in which 80 to 100 babies are born every day in a country with one of the worst maternal and newborn baby mortality rates in the world.

Still, conditions had improved considerably since Jan and Chase had first visited this hospital as volunteer midwives five years ago. Thanks to the charity Jan founded, Midwife Vision, the labour ward now had running water with a sink and pipes, reliable electricity, more medication and even ceiling fans.

Jan will never forget the sheer sense of overwhelm when they first visited. They knew it would be tough. They’d sought out a volunteering opportunity in a place where they felt they could make a real difference. Jan’s research had revealed that 80 to 90 percent of the world’s maternal and neonatal mortality occurred in Sub Saharan Africa. She learned that Tanzania was among those nations struggling to overcome this by meeting the United Nation’s Sustainable Development Goals. And she knew Tanzania was desperate for midwifery help.

But after weaving through the teeming streets of Dar es Salaam to the hospital on their first visit, Jan and Chase could never have envisaged what they would encounter. The labour ward at which they were to work was a small, hot room, packed with eight basic benches, rather than beds, at which women gave birth. There was a tap but no running water, poor electricity supply, no pain relief, no nappies, no sanitary pads, no food unless families delivered it, and only basic medication. Groaning, wailing women filled each bench and, in once instance, Jan delivered a baby on the floor.

“It was the best and the worst of humanity.”

Devastated by the rate of neonatal deaths, Jan pledged to return to Australia, and study in the United States, to specialise in neonatal resuscitation for places defined as ‘Limited Clinically Resourced’ areas, like Sub Saharan Africa. She’d already gained years of experience as a nurse, working in accident and emergency and, later, as a midwife, including several years’ midwifery in New Guinea. But this was different. The conditions were so basic. The need so great. She’d need to learn so much more.

It was after their return visit to Tanzania the following year that Jan considered the formation of a charity to help the women and babies who’d captured her heart. “Quite frankly, I didn’t need another job, and I didn’t need another board to sit on – I had plenty of things to do,” Jan says. “But there was something about Tanzania that had woven itself into my heart – that place, those women, those babies and the midwives. I had to do something more.”

Midwife Vision has also introduced training for local staff and health awareness-raising for pregnant mothers. They’ve funded birth kits for new mums who can’t afford them are in the process of introducing initiatives such an Uber taxi service for pregnant mums, providing mothers going into labour with hope of reaching the labour ward. As a result there have been no maternal deaths in the past six months, and newborn survival rate is much improved.

Jan and Chase return to Tanzania four times a year to volunteer their time as midwives and trainers. And once a year they bring another midwife and an obstetrician to volunteer too. They have also introduced practices such as encouraging mothers to nurse and say their final goodbyes to babies who don’t make it. They dress the tiny figures in clothes knitted by Australian and New Zealand volunteers. They make a copy of their footprints, and they take a Polaroid photo of the baby to gift to its mother, along with a Swahili poem (read the poem at the bottom of this article).

Jan remembers one day watching her daughter Chase dress the dead babies in little white outfits before handing their bodies to their grieving mothers to cradle. “I couldn’t do it that day,” she recalls. “I was choked up and so deeply distressed by the deaths but Chase was so beautiful – talking to the babies while she dressed them. I took the cards … to the mothers. Then in a tear-filled embrace, I said ‘Pole sana’ which means I am sorry. I hugged them briefly, kissed them, gave them the card. We cried together. The mothers who’d lost a baby lay on mattresses three to four to a bed, among the other mothers and babies. And they grieved alone, in silence, as they heard all the other babies cry.”

“I was choked up and so deeply distressed by the deaths but Chase was so beautiful – talking to the babies while she dressed them.”

Of all the things Midwife Vision provides, Jan says the most important thing it offers is a simple sense of humanity. “Sometimes it’s just about saying ‘I’m sorry muma, I’m sorry mumma’ – it’s such a small thing in the world but these touches of humanity make a difference,” Jan says. “When you’re there there’s this rhythm of beauty about women being with women saying ‘I see you, you are beautiful’ – for me that’s what Midwife Vision is all about. It’s about humanity.”

Of course dealing with daily heartbreak takes its toll. “There have been plenty of times I’ve sat at the bottom of the shower at 2am and cried it out,” Jan says. “But, early on, I realised I needed to step up as a professional. Now I find there’s a peace in the moments when you’re focusing on bringing one little angel into the world, and helping one mother.”

Jan remembers encountering her daughter Chase crying to herself after a particularly heart-wrenching day. Overcome with the sheer loss, and overwhelmed by the need to rush from one labour to the next, she looked at her mum with tear-stained cheeks and said: “Mum, I don’t want to lose my humanity here.” “But I said to her ‘when you walk past a mother labouring just reach out and touch them, look them in the eye, connect for but a moment,  say ‘it’s ok’ as you pass’,” Jan says. “It’s in moments like these that you really touch somebody.”

“It’s in moments like these that you really touch somebody.”

In awe of locals

Jan says the relationships formed with local medical staff are also enriching. She is in awe of the midwives who endure the overwhelm permanently. “In those hours on the labour ward, we find friendship, sisterhood, a shared grief and shared passion to try and overcome the sheer need,” Jan says.  “My professional career standing shoulder to shoulder with the obstetricians, midwives, anaesthetists, ward cleaning staff, theatre staff and ground people has enriched my life in ways I could never have imagined. I have been embraced into their world, their working space and become part of a team. I feel so proud and privileged to be part of this place and these people.”

Jan is also grateful for the chance to have experienced such work with her daughter. “Chase and I embarked on this adventure together and we will continue it together,” she says. “With her we have seen miracles every day amidst the chaos.”

Such relationships, and watching improvements materialise before their eyes, are like fuel for Jan and Chase. Jan is particularly proud of the ongoing resuscitation training she provides to local midwives. She gains such satisfaction in mothers being able to undergo surgery because the theatre was working and power was on. Then, of course, there are the babies. “These wonderful babies come into the world that will one day will make this nation great,” she says.

So how does Jan endure the rollercoaster of emotions? What keeps her going? “God knows it’s not the food or the heat or the bloody flies,” Jan says. “It’s the one – the one baby, the one mother who, for one day, is not invisible. Or for the babies who are here for a few minutes but are loved and held with hands that are meant to heal but failed as their heart beats give their final farewell. In those moments they make my life rich and full of hope. In those moments, I find meaning.”

You can support Midwife Vision’s work by visiting their website and making a donation. Just $5 buys anaesthetic that can save a life. Visit www.midwifevision.com

The English translation of a Swahili poem gifted to mothers of lost babies, along with a Polaroid photo of their child and a copy of his or her footprints.

“These are my footprints,

so perfect and so small.

never touched the ground at all.

Not one tiny footprint,

for now I have wings.

These tiny footprints were meant

You will hear my tiny footprints,

in the patter of the rain.

of joy and not from pain.

You will see my tiny footprints,

in each butterfly’s lazy dance.

I’ll let you know I’m with you,

if you just give me the chance.

You will see my tiny footprints,

in the rustle of the leaves.

I will whisper names into the wind,

and call each one that grieves.

Most of all, these tiny footprints,

are found on Mummy and Daddy’s hearts.

Because even though I’m gone now,